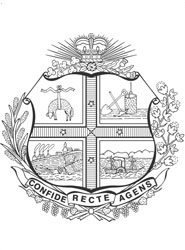 Ipswich, the oldest provincial city in Queensland, has a history going back before the proclamation of the Colony of Queensland on 10 December 1859.

Indeed, a petition signed by 91 residents of Ipswich was received by the Governor of New South Wales on 16 November 1859, seeking to have the area that was then known as Ipswich declared a Municipal Town. When separation from New South Wales was effected and the colony of Queensland created, that petition was then forwarded to the first Governor of Queensland, Sir George Ferguson Bowen, who had it published in the first Queensland Government Gazette on Saturday, 10 December 1859.

The petition stated 'that according to the last census, Ipswich contained a population of nearly three thousand souls. That they are desirous of availing themselves of the powers of Municipal self-government, and the endowment connected therewith under the Municipalities Act. And the petitioners pray as follows - That your Excellency, with the advice of the Executive Council, will be pleased to declare Ipswich to be a Municipal Town, under the name of Ipswich.'

The Municipality of Ipswich was proclaimed on 3 March 1860. A notice dated 17 March 1860, in the Queensland Government Gazette stated that the Corporation 'Shall consist of a Mayor and Alderman'. It nominated Henry Buckley, of Ipswich as the 'first Returning Officer and that the first meeting of electors shall be held at noon, at the Court House, at Ipswich on Thursday, the Twelfth day of April, in the year One Thousand Eight Hundred and Sixty'.

The boundaries of the Municipality were proclaimed on 16 March 1860.

On 11 September 1861, the then Mayor of Ipswich, Alderman John Murphy, told a Council meeting that it was necessary for the Municipality to have a 'Seal'. A committee, comprising Aldermen Bethune and Thompson, was appointed to design a seal and arrange for its production. Reverend Lacey H. Rumsey, M.A., Rector of St Paul's Church, Ipswich, was requested to create a design, and that crest (sometimes referred to as the 'Seal') is still in use by the City of Ipswich today.

The Arms portray the history of the early industries of Ipswich with a symbol (the Church) of faith in God, Who made possible those industries and production, and so the resultant prosperity of the Ipswich area. It recognises also the toil of the pioneers of Ipswich and the surrounding districts, and is a memorial to them.

An application was made and was successful and the City of Ipswich was proclaimed on 1 December 1904.

By 1904 the aldermen of the town of Ipswich believed it was appropriate for the town to become a city. At the council meeting held on 22 November 1904, Alderman William Stephenson moved that the council apply to the government to have the Town of Ipswich created a city. Alderman Robert Goleby seconded this.

By His Excellency The Right Honourable Sir Hugh Muir Nelson, a member of His Majesty's Most Honourable Privy Council, Kinght Commander of the Most Distinguished Order of St. Michael and St. George, Doctor of Civil Law of the University of Oxford, Lieutenant-Governor of the State of Queensland and its Dependencies, and President of the Legislative Council of the said State.

Whereas by 'The Local Authorities Act of 1902' it is amongst other things enacted that the Governor in Council may, by Proclamation, constitute a Town a city; And whereas it is expedient to constitute the Town of Ipswich a City, by the name of the 'City of Ipswich.'

Given under my Hand and Seal, at Government House, Brisbane, this first day of December, in the year of our Lord one thousand nine hundred and four, and the fourth year of His Majesty's reign.

GOD SAVE THE KING

In 1994 the term 'councillor,' replaced the traditional 'alderman' as the official title for city council representatives.

The Shire of Ipswich was divided into six divisions with the Council being composed of twelve members, two members being assigned to each division. This new shire was comprised of parts of the former Shires of Brassall, Bundanba and Walloon.

The Shire of Moreton was constituted on July 28, 1917 by name-change from the Shire of Ipswich. The boundaries were defined on October 13, 1916 and over the years they have been amended several times.

On June 9, 1949, the Moreton Shire Council held its first meeting in Ipswich after its amalgamation with the Shires of Normanby and Rosewood.

Council meetings were held in Ipswich, until 1959, when a move was made to establish the Council's office, store, workshop, and depot at one area. The Rosewood and District Citizens Committee presented a petition to have the Council headquarters at Rosewood. The petition was received, but at its meeting on October 15th, 1959, the committee appointed to investigate suitable sites, and purchase the same, reported the purchase of 27½ acres in Portion 115, Parish of Purga, Country of Churchill, from J.H. and A.J. Aspden, for the sum of $2200. On June 16, 1960 the tender of H. Telour of $32,002 was accepted for the construction of the new Council Office at Churchill. Total cost furnished amounted to $40,000. The new office was officially opened by His Excellency the Governor of Queensland, on March 4th, 1961.

The information below about Moreton Shire Chairman and Councillors was extracted from the original Minute Books of the Shire of Moreton & the Moreton Shire Council, 1917-1949 & 1949-1995.

Ipswich was proclaimed a municipality in the Queensland 'Government Gazette' of the 3rd March, 1860. The first step for the constitution of the town into a municipality, of which any record can be obtained, is a petition sent to the Colonial Secretary's Office, Sydney, in November 1859, stating, that according to the last census, Ipswich contained a population of nearly 3,000 souls, and that they were 'desirous of availing themselves of the powers of municipal self-government, and of the endowment connected therewith under the Municipalities Act.'

Advertisement in the Ipswich Herald on October 24th 1859

A Meeting of Borough Electors favourable to the immediate Incorporation of this Town will be held at the Cottage of Content, East Street, on Monday next, 26th October, at 8 o'clock p.m., to take steps for memorialising the Government on the matter'. A large crowd assembled in response at Mr. Billy O'Rourke's hostelry. Mr Henry Kilner presided, and it was carried that - 'In the opinion of this meeting it is desirable that the town of Ipswich should be incorporated as a municipality; and that this meeting will use their endeavours to have it so incorporated'. The following committee was appointed to push the matter ahead: Messrs. Henry Kilner (chairman), F.A. Forbes, C.F. Chubb, Christopher Gorry, William Hendren, John Johnston, Donald McBay, John Pettigrew and Donald Bethuen. A petition signed by 91 inhabitants was presented to the Governor of New South Wales (Sir William Denison); but another petition containing the names of 109 inhabitants of the town of Ipswich was also sent along objecting that the 'incorporation of the town of Ipswich at the present conjuncture would be impolite and injurious to the interest of the inhabitants; & c.

No time was wasted in conducting elections in the early days. The nomination of aldermen for the first Ipswich Municipal Council took place in the Court House, on the 12 of April, 1860. Mr Henry Buckley was the returning officer, and polling day was fixed for the 19th of April (only a week for electioneering), when the following gentlemen were duly elected: John Murphy, 191 votes; John Jonstone, 170 votes; Charles Watkins, 157 votes; Donald Bethune, 147 votes; Christopher Gorry, 140 votes; J.M. Thompson, 98 votes; John Pettigrew, 86 votes; Francis North, 79 votes; and Thomas Stanley, 76 votes. These were the first city fathers of 'Modern Athens'; and the minutes show that they put up a fine record of work in the initial 12 months.

At the first meeting Alderman Murphy was unanimously elected Mayor, on the motion of Ald. Pettigrew, seconded by Ald. Johnston. He was re-elected Mayor in the following year, and altogether was Mayor of Ipswich five times, so that he well earned the popular title of 'Murphy, the Mayor.' He was an adherent of the Church of England. The early meetings of the City Council were held in a brick building in East Street.

The pioneer Aldermen met every Thursday afternoon, and it cannot be doubted that they got through a lot of useful and necessary work. The finance committee consisted of Aldermen Murphy, Gorry and Pettigrew, and the improvement committee of Aldermen Watkins, Bethune and Stanley. The area of municipal work appears to have been confined to Brisbane Street, Bell Street, Bremer Street, Wharf Street, Union Street, Nicholas Street, East Street, and so on. This was the busy portion of the town, in the vicinity of the wharves, as Ipswich was then the head of navigation. The care and conduct of the wharves naturally engaged a good deal of attention. The records show that the early charges for wharf frontages were at the rate of £1 per foot. After the advent of the railway, in later years, the wharves lost much of their glory and importance.