Citizen of the Year: Amy Hartness

Amy has volunteered with the Ipswich City State Emergency Service since early 2003, and with the Rural Fire Service since early 2004. In largely male dominated fields, she has never shied away from the challenges presented by disasters and emergencies. In the past 8 years in the SES alone, she has invested a phenomenal 2,230 hours. Amy has held numerous positions in both organisations. In RFS she has been Treasurer, Volunteer Community Educator, Group Training Officer, Brigade Training Officer, 6th Officer, 2nd Officer and Acting First Officer. As an SES volunteer she has been an integral supporter to her unit, as Deputy Local Controller.

For more than 30 years now, Stella has been helping migrants within the Ipswich community transition to their new lives in Australia. Stella works to help them find accommodation and employment, advocates for them if needed in court, ensures their children are settled in school with the resources they need, and arranges social occasions to create a network of support for them. She also runs weekly English classes, helping them with communication. Stella is described as a kind and compassionate person, with a genuine interest in helping others.

Since the age of 14, Ripley has continually worked to help support Ipswich’s youth. Starting out as a volunteer for the Leichhardt-One Mile Community Centre, Ripley helped to coordinate successful afterschool and school holiday programs that are still running to date. Now 20, Ripley works with the Riverview Neighbourhood House where she organises weekly free breakfasts, Christmas Family Fun Days, Halloween events, the Springfield Mini Show Day, and the Jacaranda Festival Dunk for Donations at which she was the volunteer ‘dunkee’.

Transition 2 Adulthood, held at the North Ipswich Reserve on 4 October 2019, is a networking event to connect young people aged 14 to 18 on child protection orders or in the care of the Department of Child Safety, their foster carers, youth workers, and Child Safety Officers, with various support services to help them into the future. By providing a link for young people and these support services, this event helps reduce homeless and crime, increase employment, and equips youths with skills to navigate the local community for support.

The Multicultural Tamil and Indian New Year Celebration organised by the Varnam Cultural Society Qld was held on 30 March 2019 at Robelle Domain. Despite weather disruptions, it drew over 1,500 people from a range of diverse cultural communities and backgrounds including Indian, Fijian, Aboriginal, German, Iranian, Afghani and African. This event works to foster cultural acceptance within our community, decrease racism and discriminatory attitudes and behaviours and showcase the talents of local artists and performers.

Ash is recognised as one of Australia’s greatest tennis players of all time. Despite a stint off the court to hone her cricket skills, Ash returned better than ever, and in 2019 ranked as the world’s number one female tennis player. It might surprise some that she’s also ranked inside the world’s top 20 doubles players. Her elite sporting prowess is matched only by her demeanour, both on and off the court. Ash is a respected ambassador of the game of tennis, and she proudly calls Ipswich home. When she’s here, she’s held tennis clinics for the region’s aspiring young tennis players, and she is the National Indigenous Tennis Ambassador for Tennis Australia, again proudly promoting her culture and heritage.

Danielle is an innovative Indigenous artist with work featured in Australian Home and Garden Magazine. Since moving to Ipswich in 2018 she has become involved in the Ipswich community by volunteering to help promote the local Indigenous Health Service Kambu Ipswich. She has also setup an online Aboriginal Mothers Facebook Group providing current and relevant information around parenting for mothers and volunteers her time teaching children about Aboriginal art and culture.

Pat has been a volunteer with Protect All Children Today Inc. (PACT) for 10+ years and has supported nearly 500 children and their families through the daunting criminal court process in and around the Ipswich area. PACT volunteers help to educate families and children about the court process and sit with children whilst they give evidence. Pat has also been a valuable mentor for new PACT volunteers in Ipswich. 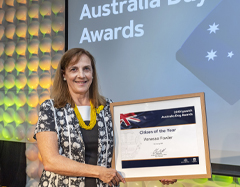 Citizen of the Year: Vanessa Fowler

Vanessa teaches at Ipswich Junior Grammar School and is also head of the Allison Baden-Clay Foundation. She has brought awareness to the school and community through the “Strive To Be Kind Day”. Vanessa raises money for the Allison Baden-Clay Foundation, which she started after the tragic death of her sister, Allison, and strives to improve the outcomes of domestic violence. 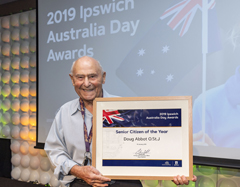 Doug (90) has spent thousands of hours working in and around Eric Edwardson Park at Bellbird Park. Over the years, he's turned the park from a largely unused facility into something the neighbourhood is proud of. He maintains the picnic area, seats, benches, drinking fountain, and monument/memorial. He also volunteers for Drug Arm and Guide Dogs Australia and helps youth. 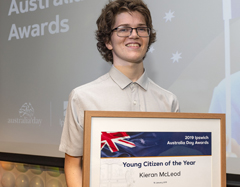 Kieran is vice-captain of Bremer State High School and is currently suffering from an inoperable brain tumour. In August 2018 Kieran organised the inaugural Walk for Brain Cancer in Ipswich which raised over $15,000. Kieran is an advocate for the disease and has attended State Parliament, where Ipswich MP Jennifer Howard told his story. He plans to hold his walk for Brain Cancer every year. 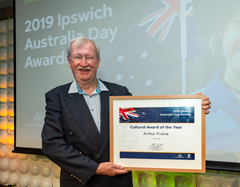 Arthur has been President of the Ipswich Regional Branch of the National Trust since 2010, instrumental in creating the award-winning Great Houses of Ipswich. He has worked in the arts and cultural sectors over five decades, with a particular area of expertise focussed on regional arts and youth arts programs and projects, and is a Member of the Order of Australia (AM). 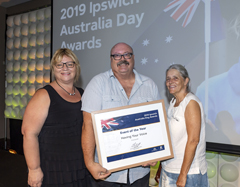 Community Event of the Year: Having Your Voice

With a small budget of $500 and a committee of 6 volunteers, ArtsConnect Ipswich Inc hosted the exhibition and workshops 'Having Your Voice'. It supported artists who identify as living with a disability and through it the artists and ArtsConnect hoped to change the way society views disability, not as a hindrance but as a unique attribute. Over 60 artists took part. 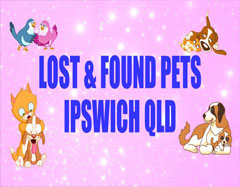 If you've fond your lost pet it's quite possible you have Jackie to thank. She's put countless hours of hard work into running Facebook page Lost and Found Pets Ipswich QLD. An online hub for anyone having lost or found a pet in Ipswich, the page has thousands of members and followers who keep an eye out for stray pets. Her work encourages responsible animal ownership in the wider Ipswich community and has resulted in hundreds of pets being reunited with their owners