Subject to changes in season and food availability, Ipswich is home to between four and ten flying fox camps. All are located in roosts found along natural or man-made water courses in urban, peri-urban and rural areas of the city.

The Woodend colony was previously one the largest colonies in South East Queensland, at times hosting over 250,000 flying foxes. During the 1980s, the Camira colony had flying foxes in the hundreds of thousands. The majority of these two colonies originally came from Sapling Pocket, where one of the largest colonies in Queensland lived until continued disturbance dispersed the colony. Following degradation of roosting habitat at Woodend, a number of smaller local roosts emerged. There is now a scattering of small colonies around Ipswich, none of which reach the population sizes common in the 1980s. 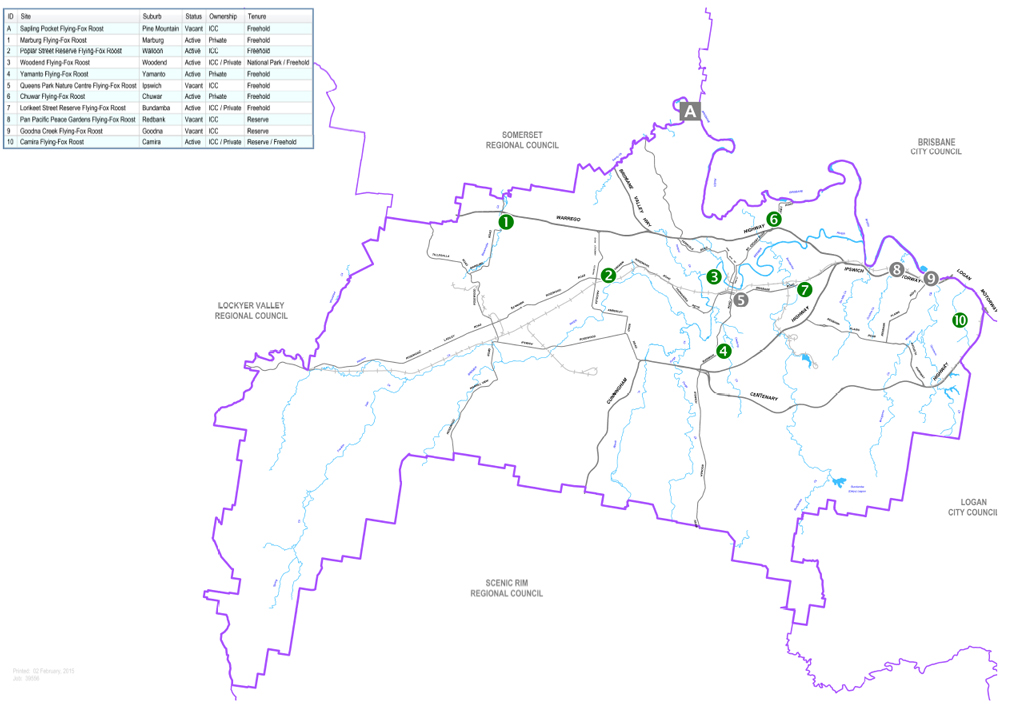 For more information on how flying foxes benefit the environment: The Importance of Flying Foxes.

For more information on the lifestyle of flying foxes and minimising their impact on daily life: Living With Flying Foxes.

For more information on the history of flying fox management: Review of Past Flying Fox Dispersal Actions.

For more information and applications for a Damage Mitigation Permit: State Department of Environment and Heritage Protection.

For more information on diseases related to flying foxes and measures to minimise the risk to humans and animals: Viruses Hosted by Flying Foxes and Bats and Human Health.

What can I do to manage flying foxes roosting on my property?

Any resident can apply to the State Department of Environment and Heritage Protection for a Flying Fox Roost Management Permit (FFRMP). Under this permit, a private resident will be able to apply for the ability to disperse and destroy a flying fox roost in compliance with the permit conditions.

What is Council's role in managing flying foxes?

Local governments in Queensland have a voluntary ‘as of right’ authority to manage flying fox roosts within the urban flying fox management area should they choose to do so. This means that local governments can undertake management action, including dispersal, without the need for a damage mitigation permit issued by the Department of Environment and Heritage. However, all actions must comply with relevant codes of practice.

Ipswich City Council has voluntarily developed and adopted policies and plans related to flying fox roost management. Historical studies of flying fox dispersals indicate that colonies in general will move less than 500 metres away from their original location if there is other suitable habitat around. Given that most roosts are found in urban areas, this means that the problem is rarely solved and is instead only shifted from one location to another.

What is Council's role in managing flying foxes on private property?

Council will take responsibility for managing flying foxes on Council owned or managed land. Ipswich City Council and the state government will provide support to private landholders on the technical aspects of managing flying fox roosts. Where a flying fox roost is bordering Council-owned or managed land and private property, Council will assess the need for management action with affected landholders.

Should I be concerned with flying foxes feeding in my trees?

Flying foxes usually choose to feed on nectar from native Eucalypt species, as well as fig trees and select fruit trees. Fruit trees such as mango trees are generally a secondary food source, but used more frequently in urban areas when local flying fox numbers are high. Flying foxes will generally utilise a food source for a very limited time and move on when it is depleted. Most trees will only be used for a couple of weeks every year.

Why has the population of a nearby colony exploded overnight?

The little red flying-fox is a nomadic species that move seasonally in response to the patterns of flowering Eucalypts and paperbarks. Little reds are noticeably smaller than more permanent residents and can often be seen roosting in extremely close proximity to one another. As the species exists as a large nomadic population that packs huge numbers of bats in a small area, summer influxes of little reds temporarily swell the size of the colony, increasing the volume of noises and smells.

There are dead bats on my property, what do I do?

If you find a dead flying fox on the ground on your property carefully place the carcass in your general waste bin. Be careful when collecting dead bats and ensure you do not touch the bats directly. Use thick, impenetrable gloves or a shovel. Alternatively, you can wrap the body in a plastic bag and bury it in a hole at least 15 centimetres deep to avoid it being dug up by dogs.

If there are a large number of dead bats and you require additional collections to dispose of them, please contact Council on (07) 3810 6666.

I hear that flying foxes carry diseases - is this true?

Viruses capable of causing disease in animals and humans have been linked to bats in recent years. Of these, the Hendra virus (equine Morbillivirus) and Australian bat lyssavirus are the most notable. Members of the public are strongly advised against handling any bat. Only those few trained individuals who are protected by vaccination and suitable equipment should handle bats. This advice is not limited only to flying foxes, but is also true for insectivorous bats.

Where can I find further information on flying foxes?

What do I do if I find an injured, sick or orphaned native animal?